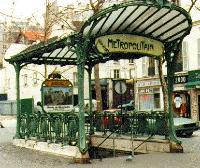 One of the main products of the first industrial revolution. Produced in blast furnace by adjunction of carbon to iron. (See on the left a metro entrance in cast iron by Guimard). It is merely used as colomns in the building field.

The raise of pottery industry with for example Bigot in France who supplied a lot of Art Nouveau architects including Guimard, Gaudi and Lavirotte and famous firms like Bigot or Villeroy & Bosch. Gaudi used old shrades of ceramics called "trencadis" to cover some of his buildings.

The interest for the use of ceramics in architecture is due to four main factors:

Art Nouveau has made a large use of glass for several reasons :

First steps of concrete in architecture

This technique was more and more used by architects and engineers to build larger buildings with shorter delays.

Elevators become to an accessible price and disponibility at the end of the Art Nouveau period. The "masters floor" is still the first floor in almost every Art Nouveau building because masters don't want to make efforts to climb up to the top floor. Upper floors were dedicated to servants. In 1888, magazines like "La construction moderne" described the technics of lift elevator.

With the arrival of lifts, the masters floor will be the last floor because air is much more respirable there and it maximizes the sun enlightment.

Invented in 1880 the incandescant light brought a revolution into lightening. From candles or gas lamps to electrical lamps. Electricity has make the design of lamps evolve.