Gallé was not only the most famous artist of the école de Nancy but he was also a bright manufacturer. He

In advance on his time, he mixed a lot of influences but always created something new and different, something mysterious that belongs to him. Among the influences we can found in his work, I have to stress on litterature and nature. Most of his vases have a poetical sentence carved or sealed in them, which is related to the object design or owner. Adapting his work to the personnality of the owner is a common feature for AN artists. Nature that he knew well, collecting and studying plants at his free time, the four works presented in this page are inspired by nature : vegetals like ferns or ombelles and animals (mostly insects) like cicada and dragonfly. 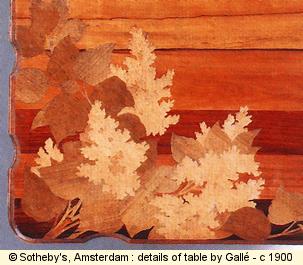 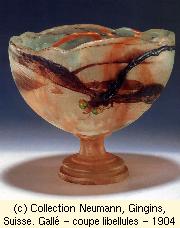 He became famous at the 1889 universal exhibition in Paris when he won a "grand prix". This exhibition did not satisfied him anyway. He thought that this exhibition was not really looking to the future. He compared it to a general antique shop. His work was spread over 5 places all over the exhibition. He knew that he could not stay alone with the increasing concurrence of Germany and the US. In 1901, he created the école de Nancy in order to gather a critical size (both workers skills and fashion style) to resist to Paris and German influences. This school gathered artists, industrialists and teachers. Gallé wanted industry to play the major role in this association.

Further information about Gallé can be found in French, English and German remotely

for their kind authorisation to use their pictures on this site.